My experience teaching my eldest son how to flyfish, and the great time we spent together on a couple of rivers in Southern Ontario. Find out which fly was productive for us. 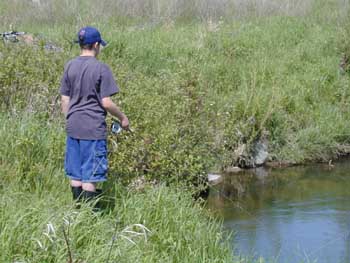 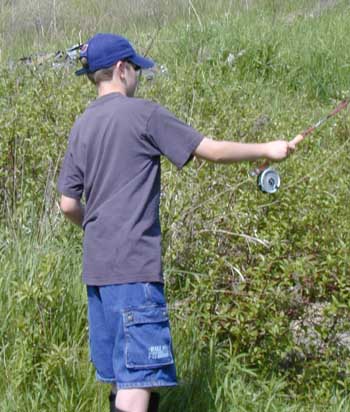 When my eldest son, Alex, was born almost 12 years ago, I was so excited about the teaching him how to fish, that one of the first things I announced at his birth was "This is my new fishing buddy!"

Since that time, Alex and I have done a bit of fishing together, but a family separation that had him moving 4 hours away has diminished the opportunities to fish together. Because of that, he had never, up until this weekend, fly fished.

When Alex and I made plans for him to come and visit without his younger brothers along, we both agreed that it would be a perfect opportunity to go fishing together. I had hoped that I could give him a few pointers on flyfishing, but really expected that he would be much happier with dunking a few worms. Was I surprised!

I discovered that kids can really pick up on fly casting much faster than many adults. Before we left for the river, I packed a Sage 7' 2wt. and a Talon 9' 5wt. along with the spinning rod. I decided that it would be better to get a pair of rubber boots for Alex rather than waders, not wanting to spend money on something that perhaps he might not enjoy all that much. He could always use the boots later, but it would be a shame to have more expensive waders that never got used.

After a great deal of anticipation and "When are we going to get to the river, Dad?" we parked the car beside the bridge at a small creek north of Oshawa, Ontario and I proceeded to give Alex some basic fly casting lessons beside the road. "Push and pull, Alex," I had mentioned to him as I watched him try to get the rhythm of casting. After a few minutes, I figured he was ready to try with some line and put the reel on the rod. There were a few tangles, but he didn't do too badly at all, and we headed down to the stream. Tying on a small wooly bugger, we watched tiny fish come up for the fly after Alex had successfully cast it into the pool. We could see a few larger brook trout in the 12 to 14-inch range sitting at the bottom of the pool showing no interest at all. Eventually, we moved on to other holes with the same luck. At one hole, we discovered that we were sitting beside a chickadee's nest when the mother sat about 4 feet away from us on a branch, with a worm in her mouth, and angrily chirped away at us. We moved away, allowing the bird to attend to its maternal duties and continued to fish.

Alex had several rises to the wooly bugger on the end of the line, but no luck in hooking any. He still seemed to be enjoying himself, and his casting was improving quite a bit. We tried a few different bead head nymphs; it was delightful watching the smaller fish in the stream hit them over and over again, but not getting hooked. After a couple of hours, we had fished most of the holes and runs so decided to move onto a river a little further west which was the subject of my Opening Day article ("Line Breakers At Heartbreak Hole"). I thought that if some of the large 'bows were still in the area, Alex could at the drift a worm under the huge logjam and experience the tug of a large fish.

By this time, my son was constantly expressing how much he was enjoying himself and the fact that he was learning how to fly fish. When we arrived at the other river, he began to express how much he wanted waders especially when the water that we crossed came above the top of the boots he was wearing. We finally made it logjam, and I set Alex up with the spinning rod while I continued to use the fly rod. After watching me hook a few small rainbows on a Midnight Blue, tied by Monte Smith, Alex was adamant about going back to fly fishing. I handed him the rod, and after a few tangles, I watched as he finally seemed to get the hang of it, and he was casting as well as anybody, with nice tight loops and getting good distance. He still hadn't caught anything on the fly yet, so we tied on one of Larry Medina's Turkey Tail Nymphs. That seemed to be just what the doctor ordered, as fish after fish began hitting the fly, but we had few solid hook ups.

As the evening went on, the mosquitoes came out in full force, but there was no complaining from Alex. We decided to head back towards the car as the daylight was beginning to wane. Naturally, we had to stop and try a few more casts into some other promising-looking water. Again, I had a number of excellent hits on the turkey tail nymph, but after awhile, was satisfied just to watch Alex cast the rod and let his fly drift down. He expertly placed the fly above the run right where it could begin its drift down through the deeper water on the other side of the river.

All of a sudden, I heard "Dad! I got one!" and sure enough, watched as a small brown trout had taken the turkey tail nymph and was whizzing through the water in front of Alex. It was brought to shore and admired for a few moments before being released back to its home. This was Alex's first fish on a fly rod, and a brown no less! Sure, it was only about 5 inches, but thrilling for both of us nonetheless.

"One more cast, Dad," Alex said a few moments later when I mentioned it really was getting dark and we should go. "O.K. son," thinking to myself that it was obvious Alex was a born angler. Another beautiful cast, perfect drift, at the end of which I heard "Dad! Another one!" Sure enough, Alex had hooked and landed another small brown trout. I am not sure who had the biggest smile - Alex or me, but when we eventually left the river, Alex was putting in his own order - his own fly rod ("an 8' 5wt., Dad"), definitely a pair of waders, a box with lots of turkey tail nymphs, and some fly tying tools and materials. Earlier, he had remarked that he had enjoyed fly fishing more than any other kind of fishing and decided that fly fishing was going to become his lifetime sport. "I'm hooked for life, Dad!"

As Alex fell asleep last night with a couple of books on fly fishing beside him, I realized that this could be an expensive summer! But, it is certainly going to be worth it.