High water fly fishing offers the big advantage of relative solitude. However, there are some things you should know before you venture out. Cameron Larsen, who lives a short walk away from the legendary Deschutes River in the Cascade Mountains has the information and tips you'll need to be successful. 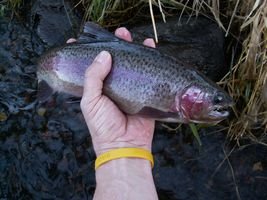 A long, long time ago, I remember waking up at 3 a.m., on a Saturday. I say waking up, although I don't think I ever went to sleep. It was opening day eve, as good as Christmas eve, in my seven year old way of thinking. Our destination was more than three hours away, to the land of huge trout, and lots of them.

Silently, in the light of the moon, my Dad and I climbed in his Ford Falcon and began an arduous three-hour journey to the land of Big Fish.

That magical mysterious place was, across the Cascade Mountains at the legendary Deschutes River. Home of montser trout. I dozed somewhat on the drive over, waking up to donuts and hot chocolate, as we rambled through the forest. At last, we descended on the flat juniper country of the 'East side', and finally began our twisting descent down the canyon to the mighty river. With my dog, I pressed my nose to the window glass, drooling with anticpation. As we crossed over, I didn't notice the off-color water or the river spilling here and there over it's natural banks. But I did notice my Dad's groan. We stopped, stretched our legs, used the bushes, and then I heard my Dad say, 'blown out.' I was curious and inquired, and learned the river was 'blown out', flooded, too high to fish. Each exclamation of the river more seriuos than the last. Until, I realized fishing wasn't going to happen today. As bad as life gets at seven, as bad as no Santa Claus. We threw rocks into the roaring mess, walked around some more, I learned about rock formations, local flora, and then we were off, back to home.

Today I live two blocks from that legendary river, and have learned a thing or two about high water fishing. I have had success here and on other rivers using some very simple techniques.

Where to find fish:

If the current is raging, fish don't really want to be out in it anymore than fly fishers do. They tend to hole up, in slower water, and luckily for us closer to shore. Look for pockets and pools, close in that will provide likely water. Riffles that are normally too shallow, will provide a feeding lane in high water. The nice thing is wading is not required if the fish are lying close to the bank. A word of caution here, high water wading can be extremly dangerous. Water is murky and visibility can be nil, underwater footing can change dramatically. Even if fishing familiar water, the under water terrain could have changed since last fished. A wading staff can help, but fishing from the bank is better yet.

As mentioned above, fish don't want to be in the heavy current anymore than you do. But they don't stop feeding. On the contrary, spring run off brings with it the speeding of fish's metabolism, and likewise their desire to eat. Although rising fish are much less likely, fish eat up to 90% of their diet sub-surface anyway. So unless there are peculiarities to your particular river, prepare for sub-surface fishing. This can be disappointing to some diehard dry fly fisher's. But because fish are close in, you may not have such easy access to large fish again, the entire year.

Not that you cannot get a fish to rise in high water. It is possible. I recommend using big bushy fly patterns. For two reasons, one is visibility is poor, and two they float better through turbid waters. Usual rough water attractors are the flies I call on, including Royal Wulff and Stimulators. High floating Foam Hoppers, or Chernobyl Ants also work well.

But by and large fish are feeding sub-surface, in murky waters. And that calls for some special rigging and techniques.

The murky water can be a fly fisher's friend. For one thing fish are less easily spooked, and they seem to feel more 'secure' hidden in their sanctuary of dark high water. For this reason you can shorten up those tippets and use stouter tippets than one would normally choose. If 6X is the norm for your particular river go down to 4X. The advantage of the stouter tippet comes into play when you are snagging up on the bottom. I sometimes avoid the use of a strike indicator during high water, so I can better feel the river bottom. As mentioned above fish in high water can be bigger than average, and with the stronger current, you'll putting quite a bit of pressure on your tippet trying to land that big fish.

Murky water typically calls for nymphs, wet flies and streamers. The ones popular in your particular area, should work in the high water. Remember nymphs are having difficulty moving around too, and much more likely to be knocked free. Rigging up with a size or two bigger than norm also helps, as trout are likey to feed on free floating nymphs more than emerging ones, at this time. If in doubt as to what to use, start with the basics, Hare's Ear, Pheasant Tail, Stonefly nymphs. Using beadheads will helps in visibility and in a faster sink rate. Vary the split shots you use. And don't forget to in a streamer or two as well. Aggravators are notoriously good high water patterns. Dead drifting these as close to the bottom as possible, and be prepared for hard strikes. If success doesn't come, try using a two fly set up, and probe at different levels.

When you find something that works, stick with it. And when you find fish stay there, fish are less likely to move on, so you are apt to get more fish in one spot than normal.

One last advantage of high water fishing is relative solitude. Most fly fishers will still see a river as 'blown out', like my Dad all those years ago. The ones that do try, usually don't have their heart in it. But for those that are patient and try the technique's featured here, their reward quite likely will be some very big fish to remember.

Cameron Larsen is a retired commercial fly tier and fly fishing guide. He now operates The Big Y Fly Company. He can be reached at [email protected]